Missing in action: kids who fail to communicate 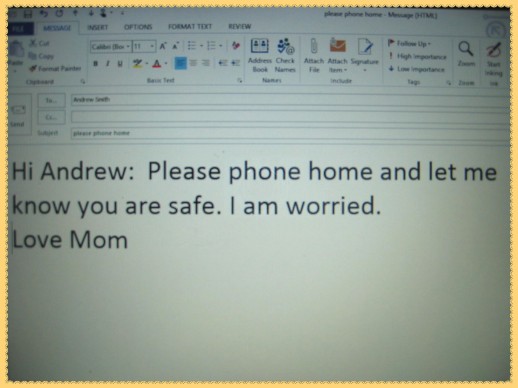 I recently received the following e-mail from a worried friend in Toronto.  She had no contact with her son for 36 hours after the time he was expected to be home:

Andrew is MIA for 24 hours now, went out Friday night, Mike (his Dad) talked to him last evening and Andrew said he’d be home last night.   Hasn’t shown up.  He was supposed to go back to university in Hamilton  today.  Can’t find him – left 2 messages on his cell which went right to voice-mail, sent a text, no reply.  Now I’ve messaged him and his best friend on Facebook…  I’m mean: REALLY!   I know he’s almost 26 and all, but if he’s staying at our place, shouldn’t he let us know where he is, what his plans are?  I am starting to get concerned.

I and thou–Martin Buber and the in-laws

For those of you who studied philosophy, you may be wondering how German philosopher Martin Buber could possibly relate to in-laws, and for those of you didn’t, stick with me.  It’s more interesting than you might think. But first I want to tell you three little stories. The names are changed but the stories are real.

Story One.  My friend Barbara revealed during a recent conversation that she prefers to keep her son-in-law emotionally at arm’s length.

“While I love my son-in-law, I never want to put my daughter in a position where she feels she could not leave her husband because of my husband’s and my attachment to him. I wouldn’t want her to feel that she is breaking up the entire family, ” she said.

Story Two.  My friend Jeff told me that he wanted to speak to his daughter about his son and his daughter’s brother, Jared.  Jeff is worried  because Jared is becoming attached to a religious sect that he (Jeff) doesn’t approve of. When I suggested that his daughter’s husband might have some insight into the situation, he responded that he was not comfortable with his son-in-law,  the situation did not involve him and that this was “a family matter.”

Story Three.  My friend Marie told me that she and her husband don’t want to get too close to their daughter’s new partner. They loved her former husband and were very hurt when the young couple broke up.  They don’t want to go through the pain of loosing another son-in-law.

While all these positions are understandable, in each case, the daughter or son-in-law is not equally valued and loved as those born into the family. The implication is that they are not fully part of the family and as a result have second class status. END_OF_DOCUMENT_TOKEN_TO_BE_REPLACED

Adult children living at home: Can it work?

“No matter why your adult child is living in your home, the good news is that you can make it work.”

That’s the optimistic voice of Christina Newberry in her book “The Hands-on Guide to Surviving Your Adult Child Living at Home”.

Her easily understood 115 page guide is chock-a-block full of good advice on strategies on how to live with your boomerang kid. Although she herself is a young adult, she takes the perspective of the parent.

She based her guide on her own experience of moving back home when she was 21 and then again for a few months at 29.   END_OF_DOCUMENT_TOKEN_TO_BE_REPLACED

Did you know that:

If you have any comments on these or other statistics concerning Canadian families, I would love to hear from you.  Please send a message in the Reply Box below.